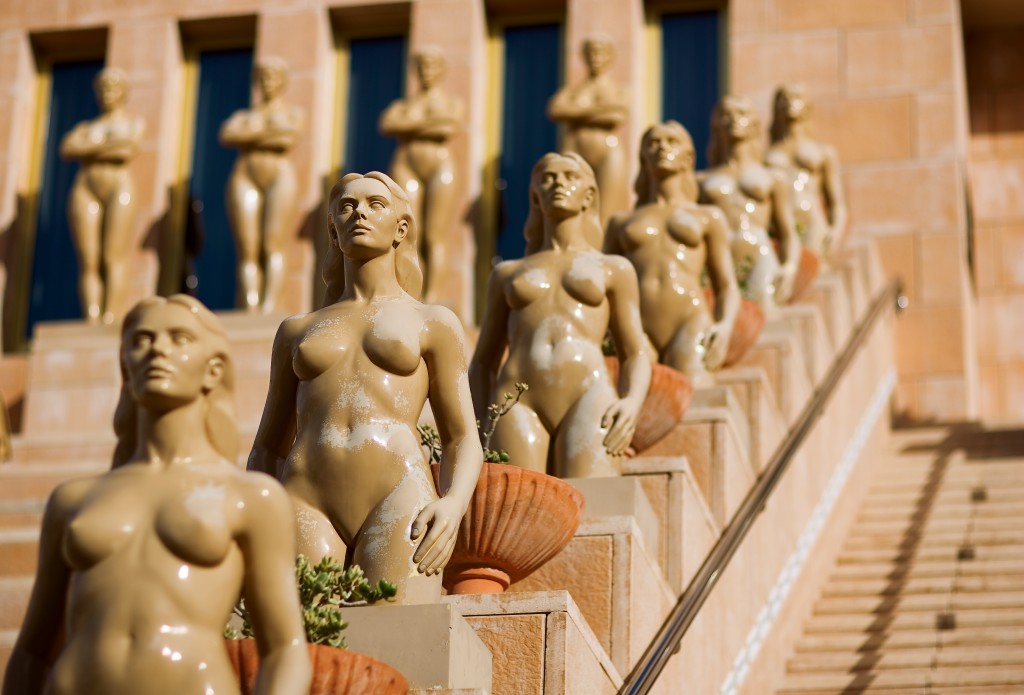 A couple weeks ago i went to Las Vegas for the weekend to see shows and lay by the pool in the desert sun. Vegas is known to many as “sin city” for a variety of reasons; namely legalized gambling, legalized prostitution (it is not legal in vegas but neighboring counties), and the general acceptance of debauchery and late night activities like clubbing and strip bars, oh excuse me, “gentleman’s clubs.” My trip was posed to be relaxing and fun, a Cirque du Soleil show, then dinner, then wake up and lay by the pool and, oooh, spa treatment?! But there was a hyper undercurrent in vegas that led my sensitive psyche into a realm of discomposure. I think it started in the car while entering vegas from our origination in LA, when the bombardment ensued…and by bombardment I mean BOOBS!

Big, fake, boobs on tiny, skinny, young women on huge posters saying things like “Treasures, Gentlman’s Club and Steakhouse” ooo yummy, steak and boobs! or “Little Darlings – Totally Nude, Where Your Fantasies Begin” ooo, “little darlings” they sound “barely legal” yay, totally nude teenagers with big boobs! Well, needless to say, I knew I was in for a goooood time! And by good time, I mean being completely assaulted by more than just images of boobs on billboards but also those nude advertisement cards, featuring women’s posteriors, that people snap at passers-by on the strip sidewalk. You couldn’t drive or walk two feet, without seeing something advertising “hot babes direct to your hotel room” or “bachelor parties are our specialty, come party with our fine ladies and bring your friends!” The side-walk hawkers mostly target men with their flesh cards, but many people just take them and then drop them two seconds later, which results in a sort of sidewalk tiled effect with mini pictures of boobs and butt cracks that the sweaty, las vegas tourists, just trod over on their way to partake in more “sinful” activities.

The image of nude-lady paper tiles littering the streets and people mindlessly walking all over them, seared itself in my mind, along with the slogans of, “hot babes straight to your hotel room” on the passing trailer billboards, I was left feeling definitely disturbed. The issue is so complex and layered to me that I sat down to write this in an attempt to clarify my own feelings. I have always preached the dogma of, ’embrace yourself and your sexuality.’ I believe it is really important that women harness the power of their sexuality and own it for themselves. By that I mean figure out what “turns you on” so to speak, and don’t be ashamed about it, as long as it is organically generated by your innermost self, and not implanted or artificially motivated or extracted by society.  I have always claimed to be a “sexual person,” whether it’s being open about masturbation, which is traditionally taboo for women to talk about but hilarious for men to talk about, or just being a sexual person in whichever way I want. I always try to ask myself, ‘wait, do I really feel sexy or is this what society tells me is sexy?’ Girls are raised with a societally imposed guilt that is hard enough to escape. That guilt may be religious dogma or nurtured acceptance, but it is my belief that this same guilt, in everyone’s lives, male and female alike, is what leads the “sin,” in Sin City, to be so darned appealing.

The issue of sex and sexuality in the US is a weird one. For, as progressive as we are politically, we are mean-virginal-nuns-who-could-just-use-a-good-orgasm, when it comes to sex. Just like with so many other things in life; if it’s forbidden, it’s tantalizing. Take fried foods and sweets, or drinking when you’re a teenager or drugs when you’re any age, just like the latter examples; sexy/kinky sex, prostitution, etc. is taboo and forbidden enough that it is intoxicating. The scary thing about sex, in contrast to a big piece of chocolate cake, is that there are more people involved, besides yourself, that may incur damage from said indulgence. And, the majority of the people that serve to be damaged, are young girls and women. It is just a fact that the people who partake in the “sex industry” are men. This is obvious by the visual enticements from ground to sky in Las Vegas. It is not to say that I am against all strip clubs and strippers and escort services and blah blah, but I am against the damaging and exploitative effects that these industries have on women. I am an advocate for women, for their lives, careers, sexuality and the fact is, that these industries do not serve in women’s best interests. Annually, around 17,000 women and girls are sold into sex slavery in the US, and over a million women and children (yes children!) worldwide. These women, girls and children suffer horrific injustices in their formative years that result in either death or a life of torture and emotional turmoil. Obviously this worldwide, economically profitable industry, is irresistible to many male supporters, and it is also horribly unregulated.

In many European countries prostitution is legal and most famously in Amsterdam. There are many sex workers industry and advocacy groups worldwide that work to bring awareness to the validity of sex work as a profession and petition to change local and national laws involving rights for sex workers. I find the notion of legalized prostitution or “sex work” a perplexing one. Because initially I think, ‘oh no, we can’t legalize something that wreaks such havoc on women’s lives,’ but then, upon deeper introspection, it seems to me that the reason these woman are so powerless, and subject to such atrocities, is because it is an underground and/or taboo industry. Just like when you go to a European beach and see all the topless women, it’s no big deal, they’re just boobs after all and over half of the population has them… yeah, I DO mean man boobs. Then,  in contrast, because nudity is such a big deal here, it is thus, such a big deal! In Vegas at the Wynn hotel there was a “European Pool” where you could go topless and, when Joey and I went to go take a peep, there were a heck of a lot of people but no bare boobies! Probably because no one wanted to be the first one topless, but also because we, as Americans, are too SCARED… but boy, are we fascinated and preoccupied.

It is a devastating reality that woman are exploited daily as sex workers. Whether they are the runaway teenager from a troubled home, like an article on Sex Tourism states, “Contrary to the public, idealised images of Las Vegas, reinforced by powerful advertising campaigns, the prostituted girls are typically not college students working their way through graduate school, although they may be advertised as such; rather, they are the runaways and homeless teenagers who arrive in droves by bus from nearly every state..” or they are the poor Cambodian woman sold into slavery by her own family. The experiences are in a vast array but are always a mistreatment of these human beings’ lives. My boyfriend Joey recently traveled to Cambodia with his band to work with MTV Exit and raise awareness about human trafficking. The shelters that he visited, and subsequent stories he told me, were so horrible I’m not sure I would have been able to stand the itinerary he and the band traveled. In particular, they visited the Somaly Mam foundation which was founded by a former sex slave, Somaly Mam, who suffered an appalling childhood being sold into slavery but escaped with a vow to help other women and children out of the, sometimes physical but always emotional, death sentence that is sex slavery and the sex trade.

As a woman, the bombardment of boobies in Vegas, left me annoyed, a little sick to my stomach, but ultimately sad, about the state of our sex industry and more importantly the perception and depiction of women’s sexuality. Women are not celebrated as sexual beings, they are sexual objects. You are either an up-tight bitch or a dirty slut, as the same article on Sex Tourism states, “Las Vegas is the Disneyland fantasy destination for adults – where anything can happen – where anything goes and where wives will never find out.“ Why can’t the “wives” or the “girlfriends” have their sexuality celebrated in a society that sees all humans as sexual beings, as opposed to just the men, who are ‘forced’ to search out ‘barely legal sluts’ behind their frigid wives’ backs? I see only two solutions, and both are extreme: either abolish all sex industry and exploitative activities and crack down, in such an extreme way, that sends all horny men packin’ and mentally ravaged, barely legal women, to some serious therapy, or, (since the former seems rather unrealistic), legalize and regulate the shit out of the booby business! If we made the effort to just accept that it’s people’s bodies that we’re obsessed with and recognize everyone’s right to their unique and SELF-motivated sexuality, than I can only see positive results coming from that. By giving the power to the women, as opposed to the pimps or the enslavers, and recognizing it as a profession and them as people, not dirty and disgraceful, but people who need to be protected. Maybe then, we could have a more mature societal perspective of the whole notion of sex. Then it becomes a personal decision for everyone involved, the John and the Jane or the bachelor and bachelorette, who all take into consideration the brevity of the consequences. Maybe then, Vegas would no longer be known as “sin city,” and as a women, I wouldn’t feel as offended walking the streets. Hopefully the fact that it isn’t sinful anymore would make the industry less popular or at least, more of an even playing field. So that, as I walked down the streets of Las Vegas, I may be treading on some booby pictures but phew, there too, is a big ol’ penis!

resources and articles on the subject: