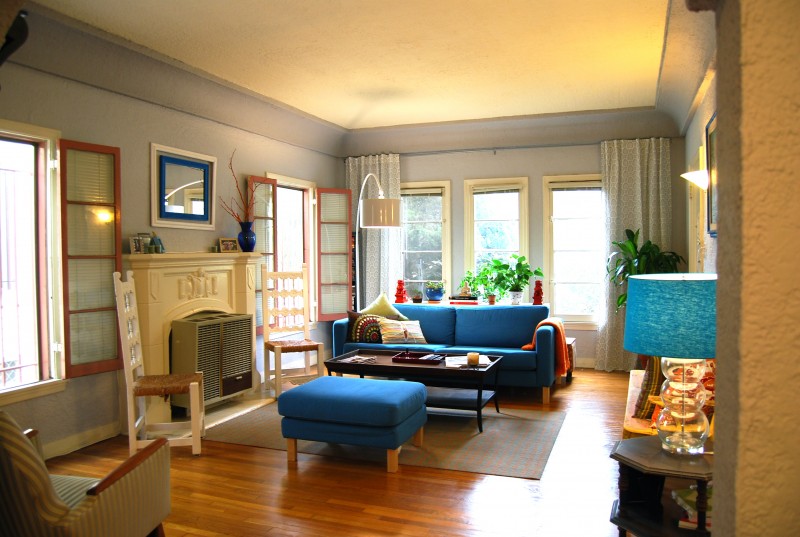 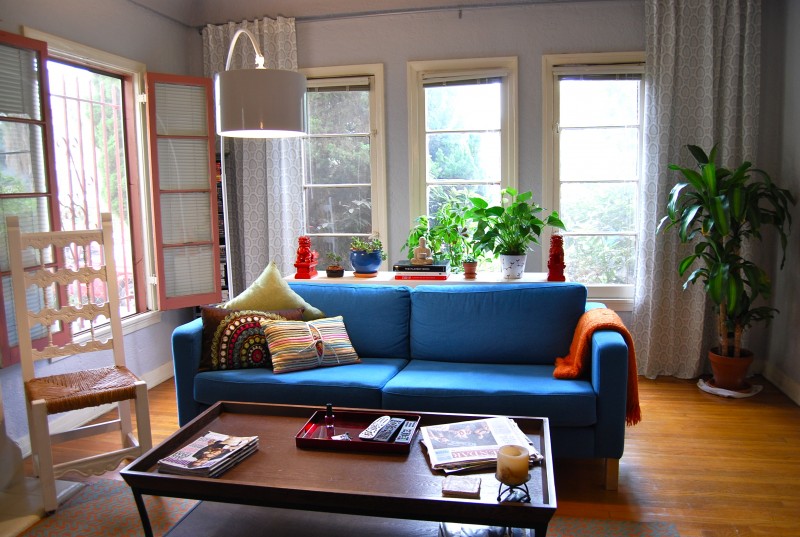 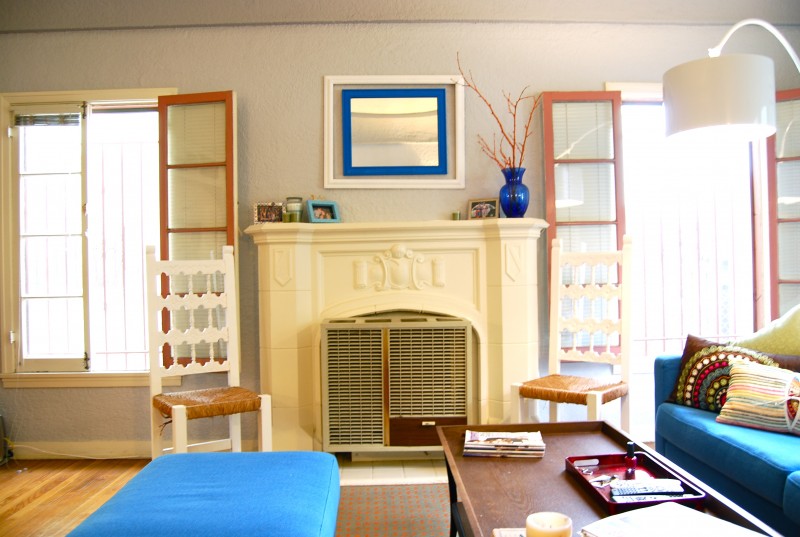 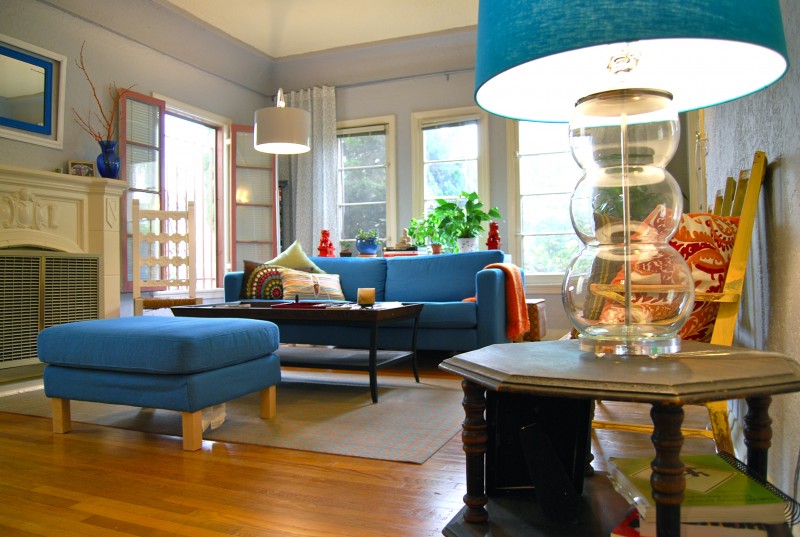 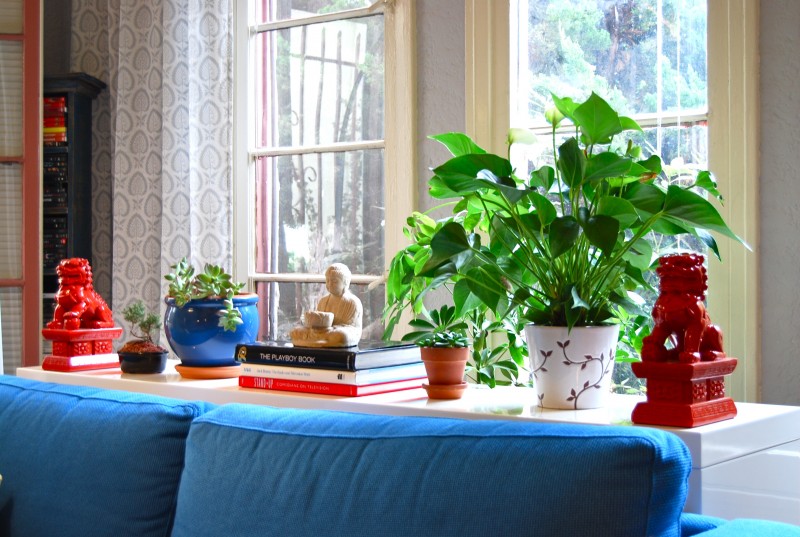 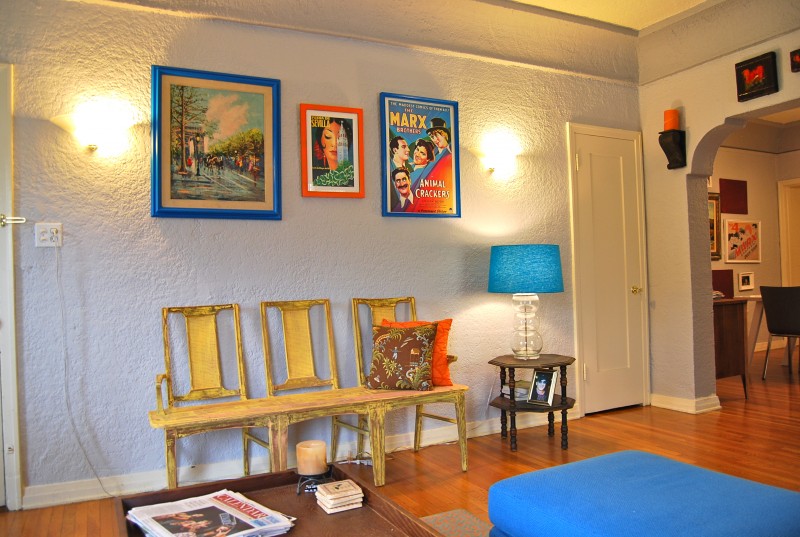 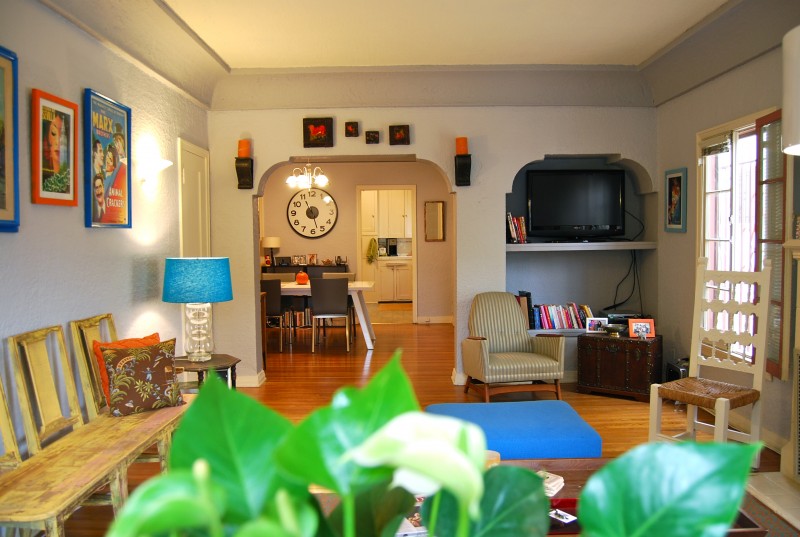 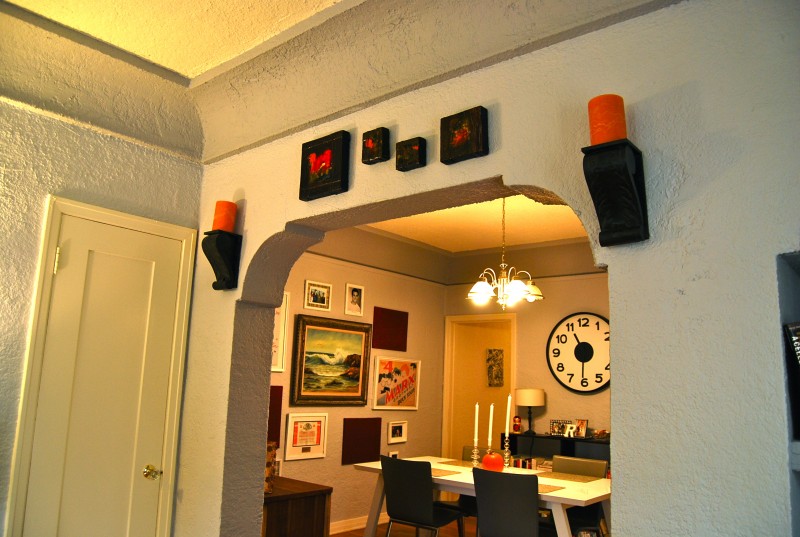 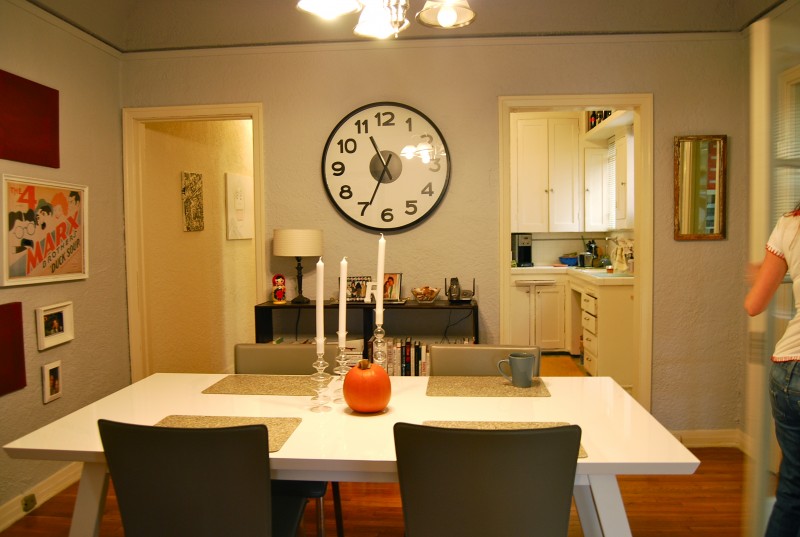 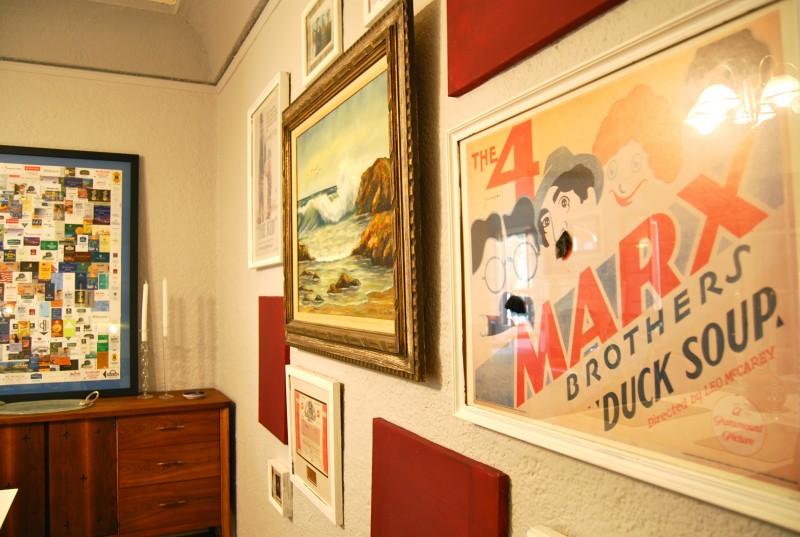 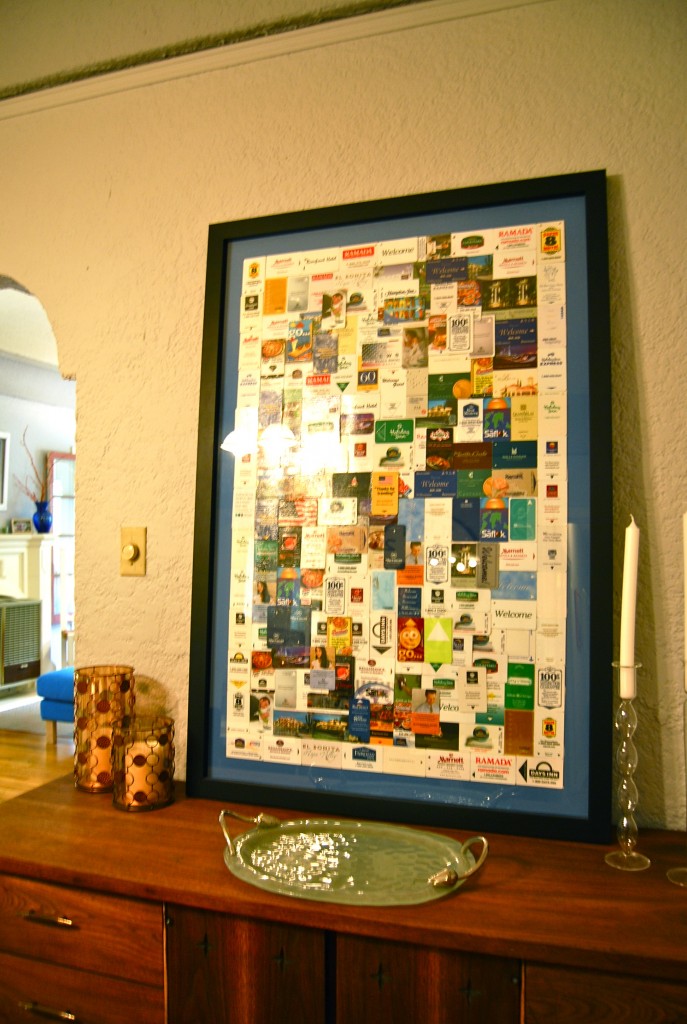 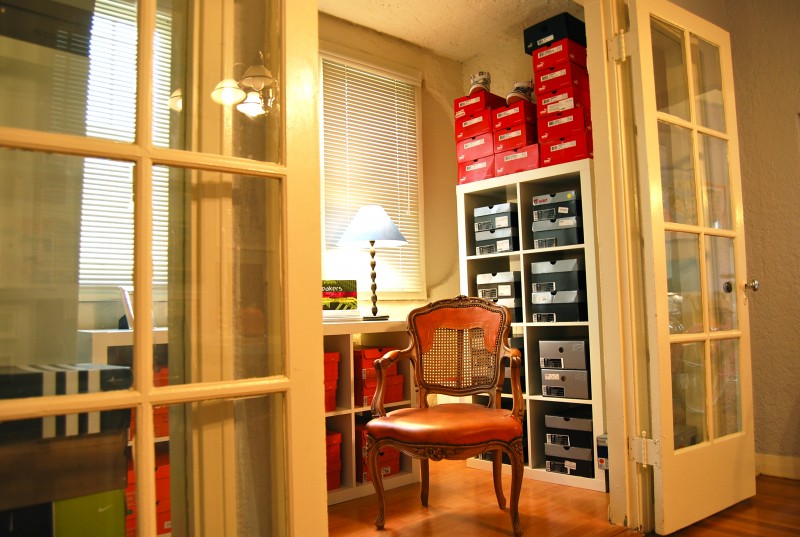 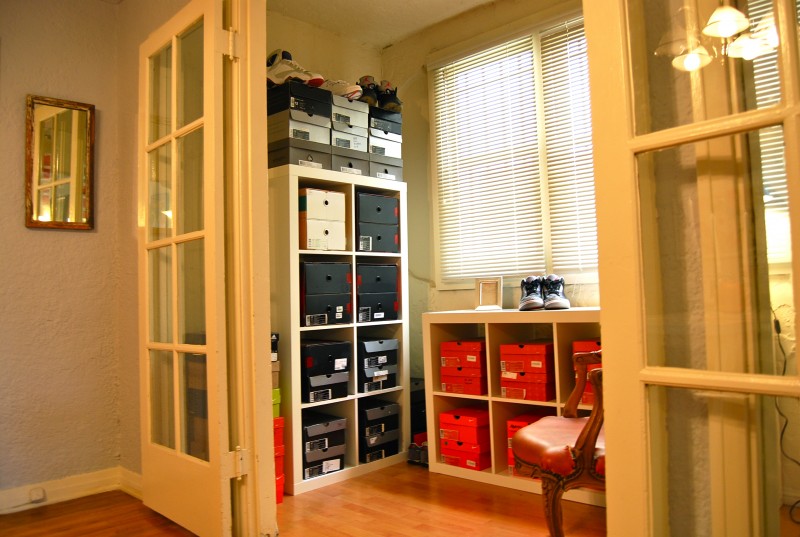 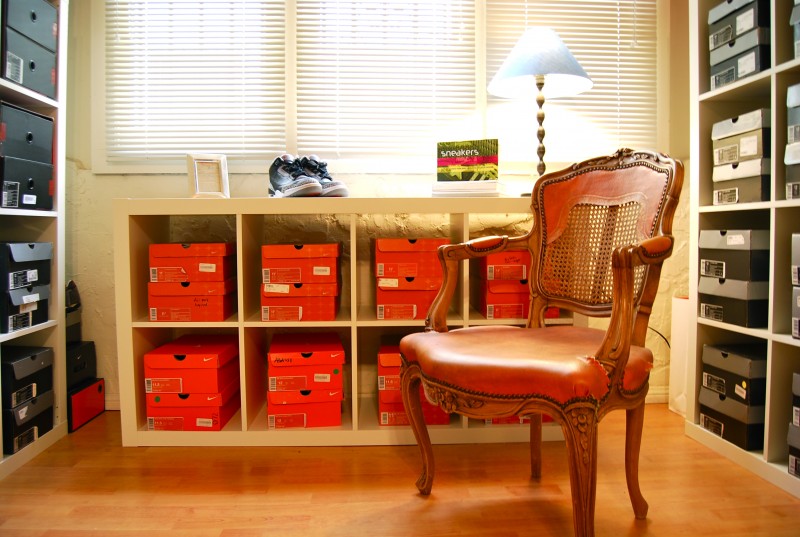 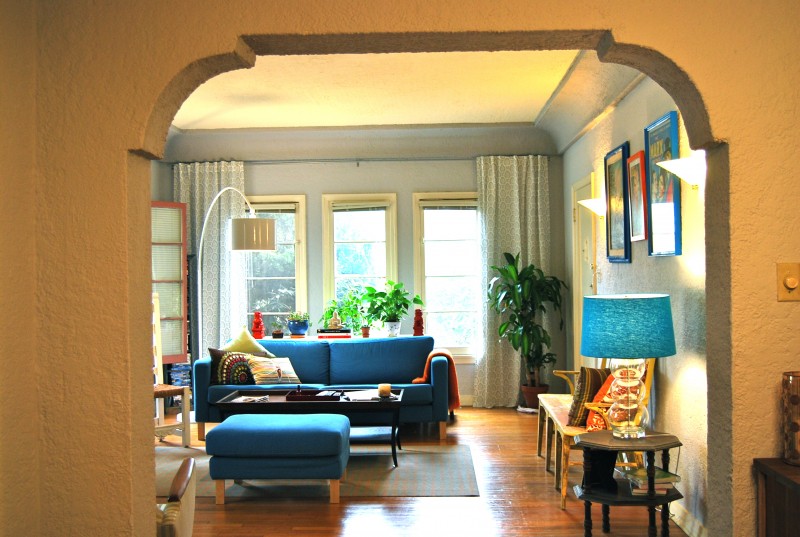 my friends Rachel Specter (told you this was the week of Rachel) and Dan Levy are engaged and thus, they shacked up together! much to my delight, they asked me to help them redecorate the two bedroom place, that Rachel had previously shared with our friend Audrey. Above are the AFTER pics of what we accomplished.

overview: this was definitely a group effort and I have to say Rachel has good instincts on her own. we basically set out the parameters which were choosing a color palette and design “style.” this is where Dan and Rachel had butted heads because he wanted modern and she wanted more vintage eclectic. i assured them there was a way to meet in the middle and they proved it by picking a wall color and some staple furniture pieces all on their own! we decided on the neutral grey walls which are “modern” but also a great back drop to the funky art (that they already had) and the colorful frames (which they painted to fit into the color palette). i have to say, besides helping hang the curtains, this was a pretty labor free project because Rachel and Dan did all the painting!

furniture and accents: They decided on a grey, blue, orange and white palette, which we softened with the patterned grey panel curtains in the living room, throw pillows and a mixture of wood tones in the furniture. The blue couch is Ikea (same as in my sister’s apt), the yellow chair bench was flea market, as well as the outer empty frame that we put around a framed mirror to hang over the fireplace for a funky and layered effect. the two (amazing) white and woven chairs on either side of the fireplace were thrift store bought from Out Of The Closet for the crazy price of $15 each! they were originally dark natural wood, but we modernized them a bit to fit in, with some white paint. They were sure that they wanted an accent picture wall, so we took some existing art, 3 canvases (that Rachel had painted maroon) and some flea market smaller frames, to fill in the gaps, and laid them all out on the floor first to decide on the pattern. i detail the process here. i think the effect really warms up the dining room and works nicely in contrast with the sleek white table and grey leather chairs.

personal touches: i have found that there is always a way to work in your favorite accent pieces. this is obvious in the addition of Dan’s sneaker room. yes, he needs an entire room (pssst, and they still didn’t all fit) buuut, that’s something for therapy. in the meantime, we made them decorative objects by getting 3 of the Ikea EXPEDIT bookshelves to house the, ahem, pretty orange boxes. i told him to keep the room as zen as possible by only displaying a choice pair and keeping the rest tucked away. with the addition of a chair, the space is now a cozy reading nook off of the dining room! Rachel really embraced the process by coming up with her own touches, such as spray painting some twigs orange and placing them in a blue vase, which now ornaments the mantle.

all in all this was an incredibly successful project. it was a really symbolic process to have Dan and Rachel come together and compromise their styles and then put their own sweat and squabbling into something that turned out beautiful and functional! here’s to a great and colorful life together my friends!