mac n’ not quite cheese 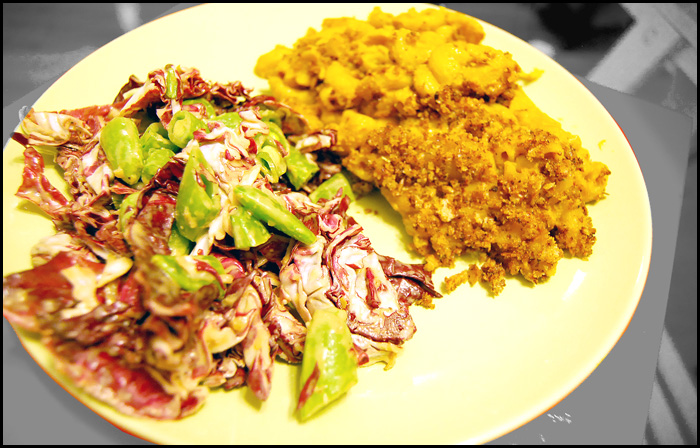 being macrobiotic/vegan for the last hmm, 4 months now, has been a lot easier than i expected! there are so many recipes out there and ways to get creative in the kitchen to make this an enjoyable and tasty way of life. living in LA and having access to tons of different vegan/macro friendly restaurants has made it fun as well….annnd the fact that Joey has been a willing participant has made it easy to cook for the both of us. many people fear that they will feel deprived (of meat and dairy) if on a vegan/macro diet. true, if you are a hardcore cheesy addict, you may have some cravings in the beginning, but there are so many substitutes and yummy things to eat, that i don’t think you’ll miss it enough to face plant in the butter dish.

one of the yummy substitutes is this Vegan Mac N’ Cheese recipe. it is made with Nutritional Yeast, which is really good for you and chock FULL of B12 vitamins, which is arguably the only hard vitamin to come by in copious amounts if you’re on a vegan diet (because of the over-sterilization of our modern soil…basically we don’t eat as much poop on our veggies as we used to). i made this recipe the other day and paired it with a raddichio and sugar snap pea salad with vegan thousand island dressing (Follow Your Heart)…mmmmm!!! i’ve tried other recipes for vegan mac n’ cheese, and this is by far the best….

**How i made homemade healthy breadcrumbs:
Breadcrumbs from a box actually have a lot of unwanted ingredients. For your own easy, homemade, breadcrumbs, you will need:

Toast the slices of bread in the toaster until brown and crisp. Then break into smaller squares and put them in a food processor with a few sprinkles of oregano, basil and garlic powder. Chop and grind until the bread is crumbed to perfection. Then sprinkle on anything!!