I’d say the greatest gift my mom gave me was her honesty.

Let it be known that my mom is a crazy exaggerator. There were stories that she told throughout my childhood that got more and more fantastic with each re-telling…a “two-headed goat,” you say? “She flew across the room,” or just ran? “He was shooting morphine into his stump arm“???? Mmmmkay, that last story detail actually never changed. The stump arm being shot up with morphine belonged to one of the two drug addicts that my mom ran away with when she was 18. She was not into shooting up morphine, not her drug of choice, nor did she have anything stumpy, beyond her short stature (she’s petite, not stumpy) but she did want to get the heck out of her hometown and the two drug addicts were taking a field trip to the West Coast and became her sketchy ticket outta there. Along the way, they stopped for a pit stop at a gas station and while my mom was in the bathroom, Stumpy and his friends decided to rob the place. My mom came out just in time to get shoved in the backseat of the car and duck as a hail of gunfire followed them out of the gas station parking lot. Apparently, gas station man had a gun and was not happy about being robbed…or maybe my mom just made a really stinky poo. Both are possible.

Crazy story, right? Most moms don’t have stories like that. The fact that my mom chose to tell me the tales of her raucous youth, while I was still in my formative years (ehh 8 to 18 I’d say), may seem reckless to some, but I always appreciated my mom’s honesty. ‘Did you ever do drugs Mom?’ I’d ask, “Of course, I did everything except heroine” was her response. Then tales of her acid trips would consume our 40 minute ride home from school as the setting autumn sun glared through the windshield of her station wagon.

In high school, when the proposition of experimenting with drugs came into my world, I factored my mom’s stories and experiences into my decisions. I felt that, because my mom had been so honest with me, her own stories had become an extension of my memories, thus, I was able to say, “No thanks” to acid (it sounded way to scary). However my mom’s stories of marijuana seemed mild enough, so in 9th grade, I smoked pot for the first time and dabbled throughout high school and college. I’ve never been really into getting stoned (I don’t like the cloud-like haze) and I’m definitely not condoning illegal drug use, I’m just sharing my experiences, and I guess my mom’s with you to celebrate Mother’s Day! Haaaa, okay a little weird.

That same honesty my mother applied to my queries about sex and puberty, etc. I was never handed any pamphlet to read on my own time. Instead, my mom told me all the details about how babies were made and followed up with the viewing of a documentary that I uncomfortably watched in the same room as my grandfather one Summer visit to Maine. I remember being around 7 or 8 and squirming at the sight of animated sperm, wriggling their way through a red-hued fallopian tube…”can we watch Splash instead?!” But the info stuck, and her complete honesty regarding the whole story of conception to birth actually took some mystique out of sex, and I was able to approach it from a healthy and knowledgeable place in my adolescence.

I was also fully prepared when I got my period at the age of 12 in the middle of my Summer art class. Mom had told me exactly what to expect and why it was happening. Although, upon seeing the weird brownish blood in my undies, I initially thought I had pooped my pants. It wasn’t until I got home and showed my mom did she confirm for me, accompanied by a big hug and smile that I, had become a woman. “Smell it” she said, “It smells kind of like raisins” …. “ewwwwww, Mooooom!!!!!”

And with that, Happy Mother’s Day to all of you mothers out there! Be honest with your children, you both deserve it. 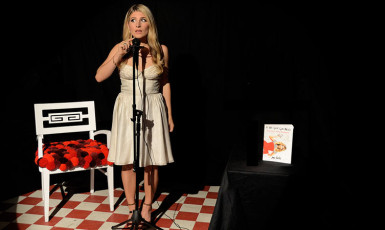